April A to Z: I is for Imagery 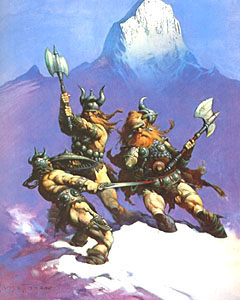 Today's post is a complete cheat of the A to Z challenge, too busy with work and "I" is stumping me. So, we go with Imagery. No game should go without lots of good imagery from the DM. Good descriptions and words taken from good pulp writers can help that immensely. I suggest of course the staples R.E. Howard, C.A. Smith, and of course H.P. Lovecraft to start. Good examples can be found online, so without further delay - and to give you something worthwhile to read today, I give you two examples of great stories with links to them for your online reading pleasure. I hope to be back on track tomorrow with "J".

From "The Charnel God" by C.A. Smith (can be found here).


"Mordiggian is the god of Zul-Bha-Sair," said the innkeeper with unctuous solemnity. "He has been the god from years that are lost to man's memory in shadow deeper than the subterranes of his black temple. There is no other god in Zul-Bha-Sair. And all who die within the walls of the city are sacred to Mordiggian. Even the kings and the optimates, at death, are delivered into the hands of his muffled priests. It is the law and the custom. A little while, and the priests will come for your bride."
"But Elaith is not dead," protested the youth Phariom for the third or fourth time, in piteous desperation. "Her malady is one that assumes the lying likeness of death. Twice before has she lain insensible, with a pallor upon her cheeks and a stillness in her very blood, that could hardly be distinguished from those of the tomb; and twice she has awakened after an interim of days."
The innkeeper peered with an air of ponderous unbelief at the girl who lay white and motionless as a mown lily on the bed in the poorly furnished attic chamber.
"In that case you should not have brought her into Zul-Bha-Sair," he averred in a tone of owlish irony. "The physician has pronounced her dead; and her death has been reported to the priests. She must go to the temple of Mordiggian."
"But we are outlanders, guests of a night. We have come from the land of Xylac, far in the north; and this morning we should have gone on through Tasuun, toward Pharaad, the capital of Yoros, which lies near to the southern sea. Surely your god could have no claim upon Elaith, even if she were truly dead."
"All who die in Zul-Bha-Sair are the property of Mordiggian," insisted the taverner sententiously. "Outlanders are not exempt. The dark maw of his temple yawns eternally, and no man, no child, no woman, throughout the years, has evaded its yawning. All mortal flesh must become, in due time, the provender of the god."
Phariom shuddered at the oily and portentous declaration.
- - - -


The clangor of the swords had died away, the shouting of the slaughter was hushed; silence lay on the red-stained snow. The bleak pale sun that glittered so blindingly from the ice-fields and the snow-covered plains struck sheens of silver from rent corselet and broken blade, where the dead lay as they had fallen. The nerveless hand yet gripped the broken hilt; helmeted heads back-drawn in the death-throes, tilted red beards and golden beards grimly upward, as if in last invocation to Ymir the frost-giant, god of a warrior-race.
Across the red drifts and mail-clad forms, two figures glared at each other. In that utter desolation only they moved. The frosty sky was over them, the white illimitable plain around them, the dead men at their feet. Slowly through the corpses they came, as ghosts might come to a tryst through the shambles of a dead world. In the brooding silence they stood face to face.
Both were tall men, built like tigers. Their shields were gone, their corselets battered and dinted. Blood dried on their mail; their swords were stained red. Their horned helmets showed the marks of fierce strokes. One was beardless and black­maned. The locks and beard of the other were red as the blood on the sunlit snow.
"Man," said he, "tell me your name, so that my brothers in Vanaheim may know who was the last of Wulfhere's band to fall before the sword of Heimdul."
"Not in Vanaheim," growled the black-haired warrior, "but in Valhalla will you tell your brothers that you met Conan of Cimmeria."
Heimdul roared and leaped, and his sword flashed in deathly arc. Conan staggered and his vision was filled with red sparks as the singing blade crashed on his helmet, shivering into bits of blue fire. But as he reeled he thrust with all the power of his broad shoulders behind the humming blade. The sharp point tore through brass scales and bones and heart, and the red-haired warrior died at Conan's feet.