Working on a Traveller conversion.

I have started work on a fantasy version of Traveller (using the OGL and Mongoose's SRD). I have altered the skills somewhat, and have started stating up career paths (though I am not sure I will stick to 4 year terms). I never got to play Classic Traveller (and the other versions never interested me as I don't care for the OTU). I love the 2d6 method of Traveller however, and it should port well for a fantasy system. My only real hang ups will be magic and religion. I would just as soon keep the spells from D&D and port them over as is - somehow I need to tie them into the career paths...

It is a fun diversion.

We completed our 2nd session of Ruins & Ronin last Sunday. I had a near TPK. Only the female bujin survived a Nezumi-Oni ambush. The young ninja and fierce half-ogre fell to their wicked blades. New characters were rolled up and now we have our first Shugenja and a Headhunter in the party. They almost all died again on their 3rd trip into the mega-dungeon, however only the bujin retainer did not make it out alive for this foray. We stopped with them ready to assault the dungeon for a 4th trip. I have been liberal with the xp, so they are all 2nd level now.

I have purchased a new website to use for mostly for file storage (though I may do more with it in the future). The site is swordplusone.com, if you click on any of my Ruins & Ronin downloads now you will see the links have changed. I do have a front page up, but there is really nothing on the site yet.

I have thought about creating a forum for some play-by-post action, but not sure if I want to bother with that for now.

I have drafted a quick village map for Pulau Village (the current base in my local R&R game). We are set to meet again this Sunday to continue our game. Not much to this little fishing village.

1. Dilapidated Tea House (ran by a little old lady)
2. Traders House (this is the only trader in town, he does business with local fishermen as well as small vessels that sail from Gozu town - the interior trails are usually to hazardous for trade goods).
3. Walled villa of retired sword master (Kensei).
4. Small shrine (not maintained by any sohei). 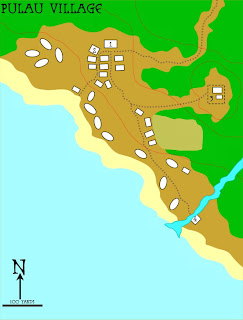 Saturday saw the first play of Ruins & Ronin for my local gaming group. We have played some Swords & Wizardry in the past year – so they knew the style of play we were going for. Characters were rolled up at the table and resulted in a Half-Ogre, Bujin, and a Ninja (some people can’t live without the thief class).

Since I had waffled on the starting setting, between the distant island of Azai or the western realms of the Eternal Empire of the Sun, I allowed them to choose which map we started with. Two out of three chose Azai. So off we were to the remote southern isle, on the edge of the empire’s reach.

The characters started play in Gozu the only major town on this remote island. We had Ki a young ninja and Shim his Half-ogre companion lounging in a tea-house looking for adventure when a young armed and armored woman (clearly a warrior) enters. This is Izoku, the Bujin. Quick introductions are made and rumors of a ruined castle on a small island just south of the island is discussed. They agree to make their way to Pulau village to find out more about these ruins.

On the trail to Pulau, Ki begins talking incessantly to Izoku (very good role-playing of a talkative teenager here) about life on the main-land (where she is from). Distracted, they both fall into a small pit trap (just deep enough to throw them off their feet), luckily Shim the half-ogre avoids the pit (he was behind them on the trail) – when a giant crab spider comes scurrying out of the trees.

Shim was wounded quickly, as was Ki (both failed their saves vs. Poison – but I did not want to restart with new characters after their first encounter so I ruled they were just sickened and at -1 for the remainder of the day). However they rallied and along with Izoku were able to dispatch the foul beast. Next they tracked the path to the spider’s lair, which was a small cave and found a pile of bones, torn armor and a small ruby and pouch of gold. Feeling sick from the poison, they chose to camp overnight in the cave (as the trip to Pulau would now carry them into the night).

They made their way to Pulau without further incident, and find a small fishing village of natives and Empire citizens. There is a small dilapidated tea house, a small trader, and a villa of a retired swords master (though they learn quickly – he does not allow visitors).

After hearing details of another group of adventurers who recently left for the ruins, they set out the next day across the shallow (during low tide) causeway to the next island (about 500 yards away). On the far side of the island thy find tracks leading up the hillside to a ruined wall with stairs leading down into the island’s interior.

After entering the first level of the dungeon, they find themselves in a small chamber with a statue of a warrior with a dog’s head. There are halls leading off to the south, east, and west. They chose to go west and narrowly avoid falling into a pit trap when they are then set upon by a band of Nezumi-Oni (Ratlings). After a quick struggle they are able to overcome these foul beasts (and we learned that a Bujin is a power house when dealing with 1 HD creatures) and Half-ogres can dish out large amounts of damage.

Next they forced open a door that led to a crypt, however there were a force of 6 skeletons guarding this crypt (which would not leave the room – as the party waited outside the doorway to fight them). After a brief stand off with no action from either side, the skeletons closed the door in the party’s face. They decided not to enter that room. More investigation found another chamber guarded by a force of zombies with the same result, a stand off.

Later the last big encounter for them was with a group of 10 Nezumi-oni, which resulted in both Ki and Izoku going down to 0 hit points (unconscious for my game) and Shim battling the last 4 on his own. The half-ogre won the day – barely. He then spiked the doors closed and waited out the night (after trying to bind the wounds of Ki). They stayed locked in the room for another day before they made their way back to the fishing village. After spending a few days resting their, they made their way back to Gozu town to buy more provisions and more armor for the half-ogre – who is finding that being a large human has a severe disadvantage when it comes to buying custom armor.

During their stay at Gozu, we decided to use the “Character Catch Up” from the old Chaosium “Cities” book. It was a fun way to play out a week in the town. Ki rolled up a dangerous mission, and decided to accept. I ruled that a stranger had approached him and asked him to steal a ceremonial tachi (longsword) from the castle. He had a 10% chance of dying but beat it with a roll of 27. The reward was 1,050 xp and 1700gps.

Izoku found herself being followed by local retainers to the Daimyo (after some mysterious event happened in the castle that caused quite an uproar). Poor Shim was accosted by 6 thugs (some were retainers of the daimyo) and was beaten severely (and scarred by a knife). Things seemed to be heating up in the town for the small band, so they debated leaving the island for the city of Ryoko, or going back to the ruins. Finally they agreed to return to the ruins and the village of Pulau. Which is where we stopped for the day.

After xp was given out, Ki is now a 2nd level Ninja, and both Shim and Izoku are both over half-way to 2nd. I am playing very lose with the xp as we don’t anticipate a long campaign.

I really liked the added use of the Character Catch Up rules, and now I have some new plots to work into the game. Also, they only covered about ½ of the mega-dungeon level 1A so I still have time to work on levels 2 and 3 (which are no-where near being complete). 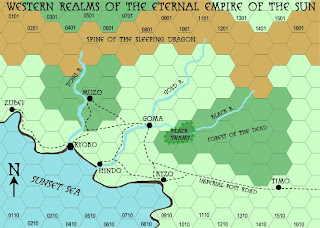 I have been working on a new regional map to use with my upcoming R&R game (to be ran for my local group), and I think I finally have it in a state where I am happy with it. My game will be centered on the small castle-town of Goma which sits at the fork of the Gold and Black rivers. To the east lies the Forest of the Dead and the Black swamp, and to the west lies the western most settlements of the Eternal Empire of the Sun. North of the Spine of the Sleeping Dragon lies haunted forests and barbarian tribes that were pushed out of the southern lands. 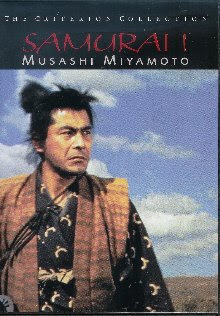 Today I am offering up the Kensei class. This class is based heavily on the duelist from Dragon #73. I have taken the same liberties that OA did and allowed the Kensei to favor any weapon (not just the sword). For some inspiration, check out the Samurai trilogy starring Toshiro Mifune (based on Miyamoto Musashi).

The class can be found here, or on my download links on the sidebar. I hope to follow this up soon with specialized rules for dueling and schools (dojo).

Back to basics (and expert). 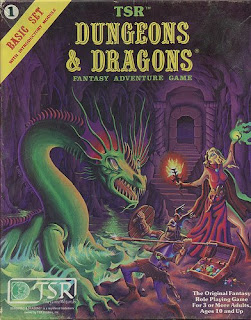 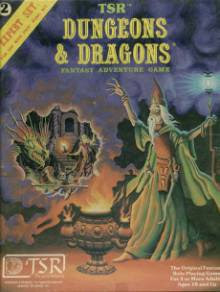 Since I have been playing in the B/X skype game ran by Patrick (Ode to Black Dougal), I have decided to re-read both Basic & Expert cover to cover. I won't promise any great revelations or insight from reading these books again - but I may post a thing or two as I read them (perhaps things I have forgotten since I last played this version of the game). I know one thing, it was fun playing this version again over skype. I look forward to our second session.

Some tunes for Saturday....

I have both albums by "The Sword", and love them both. Some of their songs are taken directly from R.E.H. stories.

The Sword - Fire Lances of the Ancient Hyperzephyrians


How Heavy This Axe: