Working on a new map. 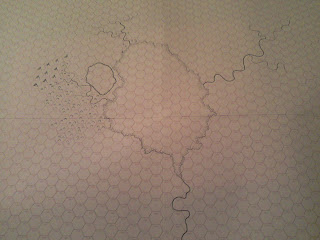 Big lake, will eventually have many islands. So far I don't hate it.

Not a bad test score, I guess..

MIke Davison took the Hardest Gary Gygax Quiz in the World and got 50%!

You are a Gary Gygax Swashbuckler. You are cunning in the ways of Gary Gygax. You've probably been to Gen Con once or twice, and if I searched your house, I bet I'd find a Gary Gygax autograph, a humorous D&D-related T-shirt, and/or a stack of Dragon magazines.

Paladin Code: You completed this quiz without using Google.

Drums in the deep.

Well it only took me 6 months after we moved into our new home, but I finally got me drums set up in my basement game room. Now I have Dungeons, Dragons, and drums.... 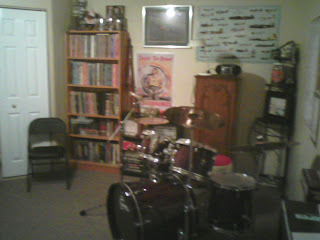 Scott has been posting about his Dwarf-Land campaign lately and it looks awesome. Me, I have been re-reading The Hobbit along with The History of the Hobbit (Part 1 - Mr. Baggins) and well when I saw this post at Scott's blog - I knew I had to draw my own Outdoor Survival Map. I have never owned the Avalon Hill game, but I found a good quality picture of the map online and went straight to work on one of the blank Judges' Guild map sheets I had (the last one actually - I and just reordered a few from Noble Knight Games).  So here is my latest hand drawn map (I am not too pleased with my art here, but it is a good working map for now). 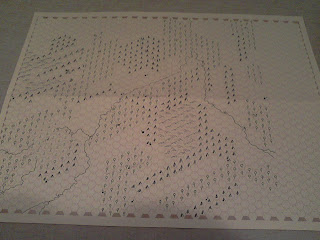 I am using the 3 LBB to stock the map and have made some tweaks to the table for determining who lives in the castle as seen below (I wanted to have more demi-human types around). I want a setting more like early middle-earth, except more Hobbits. I want Tolkien mixed with H.P. Lovecraft and Robert E. Howard. (Greedy, I want it all).

I have completed the rolls for each castle, here are the results (some have already been named):

It has been a busy summer between work and time with the family, but I am still here and checking out the blogs. I expect to start posting in the next couple of weeks again.