OD&D of the Rising Sun. 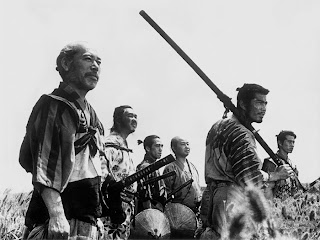 The other day I watched "Seven Samurai", again (it is probably my all time favorite movie), and thought about how cool it would be to play in that world. I own Bushido and a couple of other Japanese themed role playing games. But I am not looking to play in a purely historical Japan. I want the weapons, the armor, and the general "sense" of Japan but with D&D thrown in as well.

I want ronin, I want katanas', nodachis', goblins, and dungeons. I want a world of villages isolated and in distress, through a growing civil war as well as the raids of goblins from their mountain lairs. So what am I going to do about it?

I am going to create an OD&D version of Oriental Adventures. No worries, there will be no non-weapon proficiencies, hell there won't be any "proficiencies". This is LBB D&D with only 3 classes.

I plan to use three classes that are eerily similar to OD&D. First we have the Bushi, the classic Fighting Man. No need for a samurai or ronin class. Bushi covers them as well as your peasant warrior. Want to be a samurai? Enlist your services with a local lord. Want to be a ronin? Hire yourself out to anyone willing to pay for your services. Want to be a Daimyo? Find some land and build a stronghold. (Sounds familiar, right?)

The next class is the Sohei, he is the cleric of my setting. The sohei were warrior monks of Japan. The sohei of my setting also includes the Yamabushi, the mystical hermit-warrior monks attributed to have mystical healing powers. (They may be added later as a paladin option - but I want to start with the basic three). The Sohei will not be allowed to use swords (just because I need to somehow balance the bushi from these spell using warriors) but they are allowed all other weapons.

The final class is the Shukenja, this is the magic-user of my setting and will be restricted to short swords, staves, and daggers (again purely as a balancing aspect).

I raided Bushido for information regarding Armor Classes, and came up with the below:

I plan to keep the 1d6 damage for all weapons, though I will add 2d6 for two-handed weapons (you keep the higher of the 2 rolls).

This is of course a work in progress and I hope to have a document up when I finish my setting. Now what should I call this thing?

I am the maker of worlds!

I decided to play around with the world generation rules in the new Traveller book. I am creating a subsector of my universe based on Mythological names (from mostly European myths). I rolled for the first hex in my subsector map and rolled 1d6 to see if a world was present. I rolled a 6, so yes we have a world here. So my first hex 0101 has the world CORB in it. I then rolled for the presence of a gas giant, and there was one.

Now we can really get into the good stuff. First things first, we determine the size of our world. I rolled 2d6-2 and got 10 (-2 to 8). So we have a roughly Earth-sized planet.

Next up is the Hydrographic percentage, again using 2d6-7+1, I roll 11 (+1) to get 12. Ten is the maximum percentage however so my new number is 10 (A). This gives us roughly 96 – 100 % coverage of liquid oceans. Very interesting, it seems most of our populations live on gigantic platform cities built on top of shallow ocean shelves.

Next we roll for population, this roll is 2d6-2, I roll 12 (these dice are hot) for a total of 10 (A), that is 10 billion people! Wow, those are very crowded cities, perhaps the cities extend underground and only the factories exist on the platforms (causing the tainted atmosphere). This is one crowded planet.

Next is the level of the Law. I roll 9, giving us a very strict rule of law here.

Next up is starport, I get a result of B (a good port) and find 2 bases here, an Imperial Consulate, and a TAS.

Next is the Tech level, I roll with many DM’s for a result of 11. (early steller tech).

Lastly I find the trade values for my world and find it is a High Population (Hi), Industrial (In), Rich (Ri), and Waterworld (Wa) planet.

So we have a water world that is roughly the size of Earth, with large platform cities of industrial plants spewing toxins into the atmosphere. Most dwellings have been moved underground into crowded cities. The leader is a powerful dictator that recently ousted the previous leader (who still has a small following in exile). The law is strict and draconian refusing contact for most off-worlders. The dictator does have ties to the Imperium and trade has prospered making him rich. The Imperium has setup a base here as well as the TAS.

I am pretty pleased with these results, a lot of bits to work with.

Next up, I will generate a character from this world.

Sure, as soon as I get something to read something else arrives. Today I was most excited to find Fight On! #2 had been delivered. Wow, very nice, 88 pages of old school goodness. I have only read a couple of articles, but I am very impressed. My favorite so far is "The Outdoor Map" by James Maliszewski (map by Robert Conley). This thing is just screaming to be used, nice map with great little hooks for any DM. I love it. I am off to devour more of this awesome magazine, what a great age we live in when fans can get together over the internet to create something like this for a hobby they love. OK, I will stop gushing now. 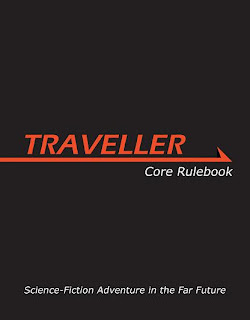 I have got my paws on the new version of Traveller (by Mongoose Publishing), so I now have some new reading materials for the next day or so. I missed out on playing Traveller in my youth and only recently acquired the Classic version of the rules. I liked what I read of the classic and I can see that Mongoose followed closely the old ruleset with this new edition.

Now I am going to have to get the available seasons of BSG from netflix.

Good news for Fight On! fans...

They have setup a website for the excellent OD&D magazine, it can be found here. Issue #2 was just released and it is over 80 pages, so go and order your copy today!