So recently I have purchased the 2nd season of the Clone Wars animated series on DVD, and I have to say these shows are miles above the prequel trilogy and very entertaining. It really makes me want to play some Star Wars type game – but I refuse to go back to Saga or Revised – I am done with extensive lists of feats and skills – just not my cup ‘o tea anymore. I have nothing against either rules-set but I just don’t have the time or inclination to go back to them.

Then I found this thread over at the Dragonsfoot forums about Darth Vader’s tomb in a dungeon. Awesome idea, which of course lead me back to Sham’s blog and this post here about the Ashen Order. Again, awesome.

So I think Star Wars via OD&D is surely possible, and heck we have Xplorers, Stars Without Number, and Humanspace Empires to mine for game rules, what more do we need?

Well, monsters and gear for one thing. So after some quick brainstorming I give you my spin on some good ol’ recognizable robots and adversaries in a space fantasy setting.

I may have to work up some a class or two – like the Mystic Warrior Monks (can be either Law or Chaos ).

The below can be downloaded here, or on my side bar.


Battle-Bot (N): AC 7 Move 6 HD 1 – A very basic model of the battle robots produced. Skeletal frame armed with blaster. These bots are not the brightest, but are cheap and mass produced.

Super Battle-Bot (N): AC 5 Move 9 HD 2 – These more bulky and advanced version of the battle-bot. These robust robots have built in blasters incorporated into their right arm.

Commando-Bot (N): AC 5 Move 12 HD 2 – These stealthy robots are an advanced version of the simple battle-bot. Capable of strategic thinking and planning, they are dangerous adversaries. Very expensive to build, luckily very few are in existence. They are typically armed with blaster rifles.

Assassin-Bot (N): AC 5 Move 9 HD 3 – These tall gangly robots are built for assassination. They are armed with blaster rifles and will pursue their target at all costs.

Destroyer-Bot (N): AC 3(5) Move 15(6) HD 4 – These advanced robots are capable of forming into a ball for fast movement, they also deploy shields when in fighting mode that provide added protection. They are armed with 2 multi-blasters (capable of 2 shots each for a total of 4 attacks each round). The AC is 5 when rolling or inside the shield barrier, the move rate is 6 when deployed for combat and “walking”.

Assassin-Probe-Bot (N): AC 4 Move 12 HD 6 – These spider-like probe robots are built for murder. They are armed with eight scythe-like legs capable of punching through the most durable armor. Quick and stealthy, these are very dangerous robots.

Clone Soldier (N): AC 3 Move 9 HD 1 – These mass produced soldiers are the backbone of many systems. Created in vats these short lived soldiers are trained to obey orders and fight to the last. They are typically armored in full-battle armor and armed with blasters.

Clone Operative (N): AC 3 Move 9 HD 3 – These are the special forces of the clone soldiers, capable of advanced planning and tactics.

Light Battle Armor AC 7 Move 12 – This is the lightest form of armor and includes an open faced helm and blast vest.

Medium Battle Armor AC 5 Move 12 – This armor has a closed helm, bracers, and a breast plate.
Full Battle Armor AC 3 Move 9 – This full body armor encloses the wearer fully and is air tight and capable of withstanding a vacuum for up to 3 hours.

Energy Sword (2 damage dice) – These tubular hilts emit a blade of polarized energy when activated that glow in a variety of colors. The blades are able to cut through most materials.

Thermal Grenade (3 damage dice) – A fist sized grenade of terrible power, those within 30 feet must save (is save is made only take ½ damage) or take full damage from blast.

I found the half-assed attempt at a fanzine I tried last year in an old backup of my now dead pc. There was a very cool piece of art by Kelvin Green for the powered armor, so I cleaned up the document and posted it to my download section. The Boarding Action Number 1 contains my weapons and armor tables along with the aliens (stuff that was already in the download section) but with the added art by Mr. Green (who's stuff is pure awesome).

You can download Boarding Action #1 here, or in the sidebar. This is the setting for my upcoming game of Ruins & Ronin.

If you are creating a character for my game, roll 3d6 six times for your stats (arrange as you like). Then roll 3d6x10 for your starting gold. I will post more notes on the world soon.

I have decided to join the Constantcon and run some of my Ruins & Ronin along with Swords & Wizardry Core rules (sans the thief class). Here is the announcement I posted to Zak's thread.

This game will be my mega-dungeon for Ruins & Ronin set in a foreign land where most classes are available. Players should roll up a first level character using either my Ruins & Ronin rules or Swords & Wizardry Core Rules. All of the below character types are available:
- Bujin
- Half-Ogre
- Shugenja
- Sohei
- Fighter
- Cleric
- Magic-User
- Headhunter (class is available on my blog)

As you can see all characters will be humans (or at least half human) and there are no dwarves, elves, or halflings to be found. Other character types may show up later. The game is set on the remote south sea island of Azai a small colony of the Empire of the Eternal Sun. It is also a trading port for many nations in the vast Southern Sea. As such there are typically many visitors in the main castle-town (small city) of Gozu.

Contact info: You can contact me at mike.davison317 AT gmail dawt com. We can only have 4 players at a time, so if there is more than 4, I may set up two different game nights. As this is a mega-dungeon, there may be many character deaths and opportunities for new players to join.


Here is the map of Azai. 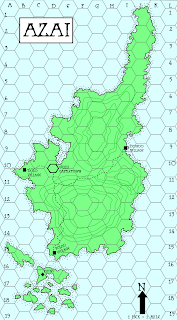 When I moved all of my S&W stuff from my old site to the new site, it seems some things didn't make the move and were lost. I just found the Kill Bot 100 (no, I swear it is not a terminator knock-off) for "The Resistance" setting using S&W White Box. You can download it here, if you wish (or on my sidebar). 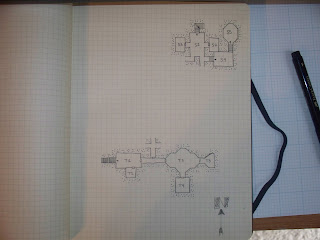 I recently got a copy of “The Best of the Journal: The Pettigrew Selections” for Tita’s House of Games. The underworld article is really cool for generating Tekumel based underworld sites so I decided to give it a go.

I decided that we are going straight out of the box EPT and this would be my Jakalla underworld “mega-dungeon”. So let’s get busy.

Rolling up the levels for my underworld, I rolled 1d10 and got a “1”. This gives me 7 levels as my underworld is under a true “metropolis”.

Starting with level 1, I roll 1d6 (+1 for 1st level) to determine the number of structures on this level. I get a “1” for a total of two. Then, rolling 1d20 for each I determine this level has a Shrine and a Temple. I roll a d6 plus modifiers for each and find that both have 5 rooms.

Next I mapped out both structures, note that I have separate entries for both and both have further exits into the rest of the first level of my underworld.

Next, I plan to flesh out the rest of level 1 and begin stocking the level. Stay tuned.

So much Empire of The Petal Throne goodness...

So last night I got to play in Hill Canton's Empire of the Petal Throne game on google+ (and had a blast). Today I got my latest shipment from Noble Knight Games... awesomenicity. 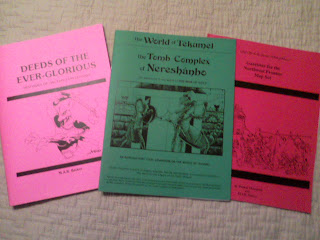 My Magic-User for Hill Canton's Empire of the Petal Throne game...

I took the challenge and produced a note-card character. :) 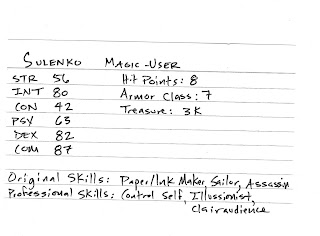