Kettil the Dane's trip to the Caves of Myrddin.

Kettil was in the last foray into the caves of Myrddin and witnessed the demise of Gomma the Ugly. Four brave souls (and 1 born loser) went off to explore that day, Madin a MU of some power (what kind is hard to say as no spells were cast that day); Gomma the Ugly, Boner the Specialist along with is retainer Gentle Ben; lastly there was Kettil the Dane.

We decided to enter the North Tower after spying some 3 naked female "statues" in the courtyard and under the watchful eyes of a murder of crows. After finding a trap door and battling a "golden" spider (it was driven off with a vial of acid), we made our way down eventually to the dungeon "proper".

Here is the main map of the level and my notes: 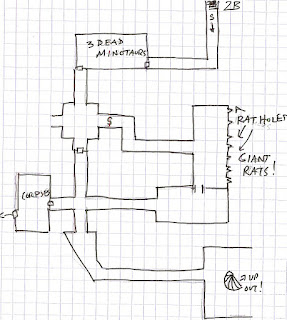 The hall on the west page end continues to show below with the death of Gomma at the hands of 3 different trapped halls... 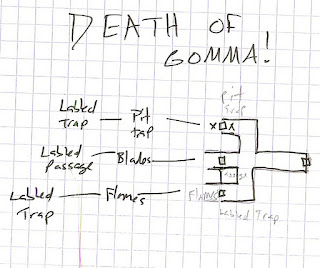 I believe the order of his death was, south door and flame trap took 1/2 his hits. Then he went to north door and fell in pit to his death. From there the party tied a rope to final door and gave a yank from 40 feet away to have the rop cut in twain by a blade trap. So beware dungeon delvers of Myrddin, for the Black Mage lies!

Happy Holidays to all!

Hope everyone has had a great holiday season, I hope to pick up blogging in the new year.