I have started working on some new classes for S&W White box, the first up is the Duelist. This is a modified class based on my Kensei for Ruins & Ronin. The big difference was to drop the A.C. bonus of the Kensei and to allow the use of Leather armor.

You can download the duelist here, or on the side bar to the right.

Here are some other sub-classes I am thinking of creating:
Archer (or maybe a hunter class)
Assassin (this may be a combination of magic-using fighter - as I am thinking of a class more like the Faceless men of Westeros).
Legionary (Roman based fighter or a Hoplite)
Charioteer (you can see where I am going with this, I am sure)
Gladiator

Not sure if these sub classes are needed, so some may be dropped along the way...

OK, you caught me.

While I have been going on about Bronze Age adventures, I am really more interested in the late bronze / early iron age Roman republic age. I have been casting about for the rules I want to use, and have narrowed it down to RuneQuest (because, let's face it, it screams ancient) and Spellcraft & Swordplay by Jason Vey (a really cool game). I have almost scrapped the idea of an all hobbit filled culture (though I may come back to that one day).

Looking at the armor tables for Spellcraft & Swordplay, I would alter it a bit for my age as follows:

This is using the deluxe rules and optional shield rule from Monstrous Mayhem. Otherwise, I would leave the weapons table as it is.

Now I think I will work up a river valley map using the random terrain generation (much like Al has done here.)

I have been on a bit of a bronze age kick lately. After re-watching season 1 of HBO's ROME, I just started watching season one of History Channel's BATTLES BC. Clearly they are basking in the glory of "300" with the presentation of Battles BC, but I still find it entertaining (unlike most of the paranormal crap they show on History Channel). This has really got me wanting to play in a bronze age setting, or develop a bronze age campaign sandbox. Initially I had thought of doing a river valley setting much like the Nile except it would be the Yondalla river valley and the culture would be entirely Halfling based (using 1E AD&D with the level limits from UA). Meaning there would be clerics, druids, fighters, and thieves - and that is it. I have not started that project (other than a very rough map), and I wonder if anyone has run a purely demi-human based campaign before? Would you as a player, play in a game if all you could play was a hobbit? Especially a bronze age setting, with spears, shields, and maybe a chain shirt for armor?

I am still not convinced that would work well. Also, I have been looking into the Deluxe Edition of RuneQuest, a game I have owned for over 20 years, but never played. It screams BRONZE AGE ADVENTURES at me, but I am not sure I like the whole magic system (which honestly I could cut out painlessly). Then again, it would be cool to actually play this game once...

I don't know if anyone else has seen this news, but STARZ network will be starting a series in 2010 based on Spartacus (trailer can be seen here). While it does look a bit much like a rip on 300's success, it still seems like it might be worth watching to me. Sam Raimi's name is attached so that ain't too bad either I guess.

I doubt it will match the work HBO did with ROME, but I can always hope. ROME really opened up my eyes to a Roman-like setting for a game. I have been kicking it about in my head for sometime, and it may have to break free soon.

I have started re-reading my current ROME sourcebooks for various games (the 2nd Ed AD&D "Glory of Rome", the GURPS book on Rome, and the d20 book - the name escapes me at the moment). All make for good inspiration. I have even seen a classic Traveller version that someone did for an ancient rome game.

This leads me to my Traveller project. Maybe my next project will tie together my love of Rome with Traveller and the OGL. I don't want to make a historical game of Rome, much like I did with R&R and Japan. I want the trappings of Rome with the ability to place it in any world. Rename the cities, new barbarians at the gate. Monsters prowling the wilderness.

I had thought of doing something like this with Swords & Wizardry too, but I am not sure the effort would be worth it. The classes would port pretty much as they are now, though i could probably slap together a "gladiator" class and maybe a few others. Armor and weapons would not require much to re-work.

I like the Republic of Rome as my setting in time, just prior to the first Emperor. Legions are manned by volunteers, gladiator games are in full swing. The armor for the time is very limited, most soldiers were the lorica hamata (chain shirt) and carry the scutum (at this period the oval shield). Much like seen here. 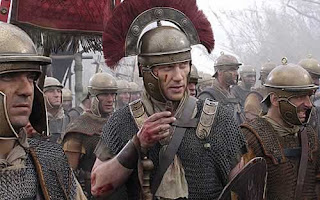 This is all very much the early stages of my addled brain, and knowing my keen aversion to keeping on track - don't expect too much anytime soon.