Presently two orcs came into view. One was clad in ragged brown and was armed with a bow of horn; it was of a small breed, black-skinned, with wide and snuffling nostrils: evidently a tracker of some kind. The other was a big fighting-orc, like those of Shagrat's company, bearing the token of the Eye. He also had a bow at his back and carried a short broad-headed spear. As usual they were quarrelling, and being of different breeds they used the Common Speech after their fashion.

Today we will look at the Orcs & Goblins of my Middle Earth. The orcs of the Misty Mountains were described as smaller and weaker of the orc tribes. While Mordor seemed to have the standard breed of orcs, and Saruman corrupted man and orc to create his Uruk-Hai (which will not be discussed here as they will not be around for my 1640 Third Age game).


Orcs / Goblins
Goblins are the Orcs of the Misty Mountains, smaller than their Mordor cousins. They are usually armed with curved scimitars, spears,and short bows. These will be the D&D “goblins” of the Holmes edition.

Orcs are the "true" orcs of Mordor, clad in black mail, larger and stronger than "goblins" of the Misty Mountains.  Armed with scimitars, spears, and bows. These are the “orcs” of Holmes D&D. Orcs - typical orcs of Mordor.

Even in Mordor there are some variations of orcs, there are the "hunters" small creatures with extremely flat noses that are excellent trackers. These orcs will be represented by “kobold” stats from Holmes D&D, but they have the tracking ability of Rangers.

So in summary, you can expect to encounter the following in or around Cirith Ungol, happy hunting:
Goblins - orcs of the Misty Mountains (weak, suffer in daylight).
Kobolds - weakest of Mordor orcs, hunters (sniffers).
Orcs - typical orcs of Mordor.

A few healing items for Dungeon Crawling in Middle Earth. 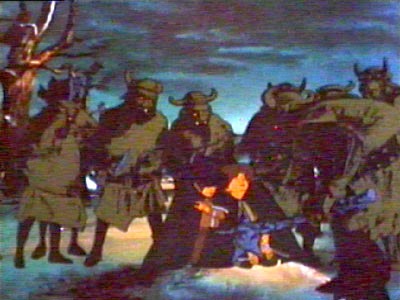 These items can be used to restore hit points in my Dungeon Crawling in Middle Earth (DCME) campaign, if you can find them.

Orc Draught - This liquid mash burns like any good stiff drink, but it also restores 1d3 hit points. (Once per day).

Elf Lembas - The elf way-bread, also provides a days nourishment, and restores 1d6 hit points. (Once per day as well).

First session of Dungeon Crawling in Middle Earth has been scheduled and a revision...

I am running the first session of my Middle Earth campaign on March 3rd at 9:30pm Eastern on google plus. Also, I have a revision to the campaign setup:


A slight change to the start / base area of this campaign. I initially said it was going to be based in Cirith Ungol - however that was a mistake. The base camp is the mostly abandoned city of Minas Ithil.

The dungeon is Cirith Ungol - and the pass to get to it. I will be posting a local "player" map later this week. 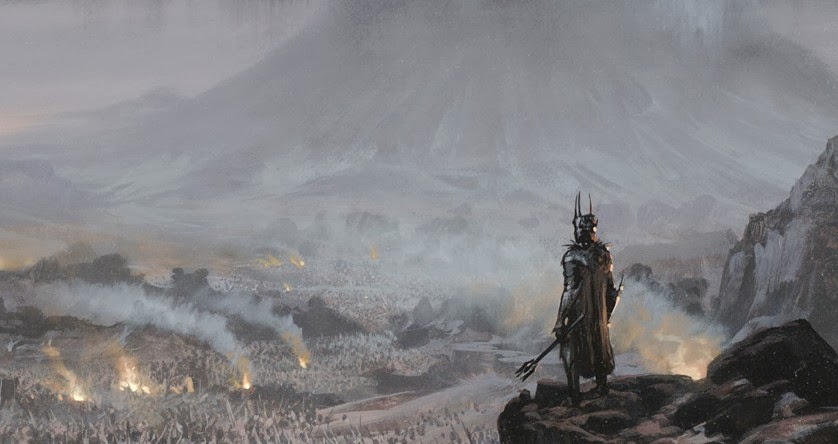 I have compiled my character creation rules into a pdf for public consumption. These rules require the use of the Holmes edition of D&D for spells and other non-character related rules. You can find the rules here, or in my download sidebar. 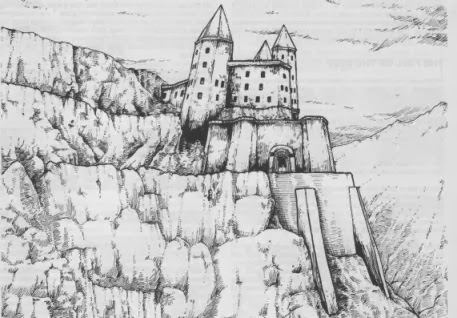 I have just about decided that if/when I run my Middle Earth D&D game, it will be set on the borders of Mordor. The Gondorian watch-tower of Cirith Ungol has been abandoned (~1640 TA) after a plague has desolated the region.  Now a daring trader named Murlann has setup a temporary camp in the abandoned tower and his small retinue of men provide shelter and goods & services to those adventurous souls that wish to plunder the evil lands beyond the pass.

I plan to use the keep from AD&D module UK3 The Gauntlet as my stand in for the Tower of Cirith Ungol (I love that map). Not that the floor plan will be needed much, as it is my home base for the game.

Of course there is also Shelob to worry about as you explore the pass and the tunnels found nearby...

"But still she was there, who was there before Sauron, and before the first stone of Barad-dûr; and she served none but herself, drinking the blood of Elves and Men, bloated and grown fat with endless brooding on her feasts, weaving webs of shadow; for all living things were her food, and her vomit darkness."
—The Two Towers

One of my initial stumbling blocks to trying to run D&D in Middle Earth was the absence of enough monsters to make it interesting. But after talking to a couple of folks in my G+ circles, I came to realize the answer was in "The Hobbit". Gollum was a hobbit that was exposed to an evil ring for years, and it twisted him into a "monster". Well surely the land of Mordor is just bubbling with "evil" power - so naturally it would twist any natural creatures that lived there. So there, instant "monster" generation - I can now run dungeons full of strange "one-off" monster types. It is my Middle Earth anyway, so canon be damned, it is full D&D ahead.

After talking with a couple of people about my Tolkien / Holmes game the other day, I started brainstorming
on where and when in Middle Earth, I could set a game such as this. Initially I had thought to start at Bree as the “point of light” game –and use Weathertop as my dungeon. Well looking at the map, that idea is not such a good idea. Weathertop is some 5 days march away so not exactly “close” to Bree.

Then I started combing through my MERP books, and started with Dagorlad, which is on the borders of the Dead Marsh (near the Black Gates of Mord0r). I like this module, but if I am that close to Mordor, why not take the final leap?

While looking through a timeline in the campaign book for “GORGOROTH”, I found what I was looking for:
1640: The Watch on Mordor fails. The capital of Gondor is moved from Osgiliath to Minas Anor (Minas Tirith). Eight of the Ulairi slip back into the Black Land to prepare for the return of Sauron. Three Nazgul, Adunaphel, Uvatha, and Akhorahil go to Nurn. Hoarmurath takes Durthang as his home. Dwar and Khamul become commanders of Ostigurth. Ren the Unclean and Indur begin anwe the construction of B arad-wath. Gothmog travels from Dol Guldur and joins the Ulairi and assists in the plan to consolidate Mordor. He stays at Ostigurth.

As can be seen, the watch by Gondor over the lands of Mordor has failed, mostly due to the terrible plague that swept through in the last year. The last remnants of the watch towers are abandoned, leaving the passes open to dark and fell creatures.

But what about bold adventurers, hoping to find some trinket or token of the former tenants of Mordor? Suppose a daring trader set up shop with a band of like-minded followers in an old tower on the borders of Mordor, in the guise of the “Gondorian Watch”? He could rent out shacks in the courtyard, or rooms in the tower itself for those with the means to pay, and from this base of operations, stealthy adventuring parties could cross into the land of the Dark Lord and seek out their fortunes. Of course they would also have to contend with orcs, trolls, spiders, and maybe even Nazgul, as these foul beasts are slowly making their way back now that the paths are open to them again. 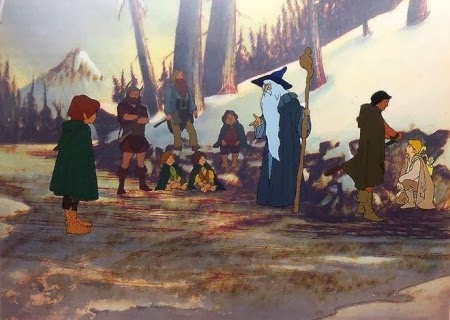 Here are the classes available in my Middle-Earth campaign (using the Holmes D&D rules). For Fighters, it covers Men, Dwarves, and Hobbits. We also have Magic-Users, Thieves, Rangers, Grey Elves, and High Elves. 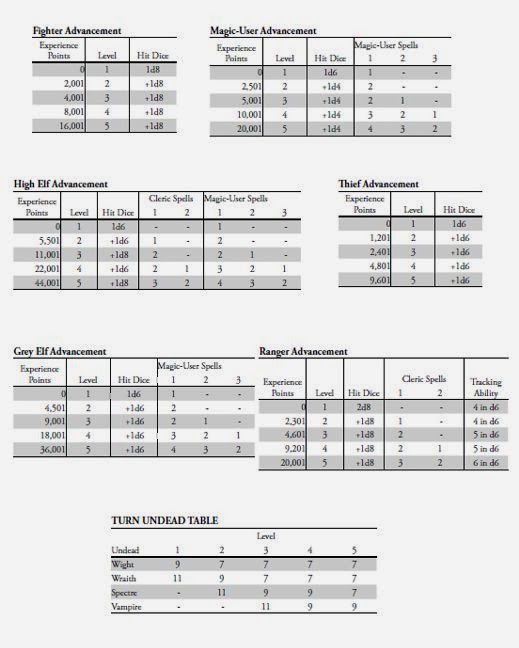 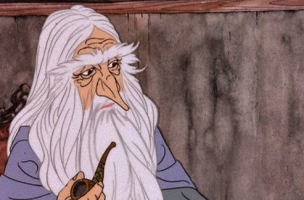 I have altered the magic-user class a tiny bit for my Middle Earth campaign. Let's face it, we all know that wizards can swing swords, because Gandalf does it! So here is my write up for Holmes Magic-Users:


Magic-users — humans who elect to become magic-users cannot wear armor and may carry only a dagger or a staff for protection. They can, however, use all magical items, but not magical weapons (other than swords or daggers). They have the advantage (shared with Rangers and some elves) of being able to work magical spells. At the start, however, they can cast only one spell and must advance a level in experience before they can learn another. Thus the magic-user starts out as an extremely weak character, but if he survives and rises in experience, he becomes increasingly powerful. The types of spells and the way they are used are discussed in a later section. Magic-users, of course, may be good or evil, lawful or chaotic, and most of their spells remain the same.

As you can see, magic-users can now use daggers, staves, and (only) magic swords. They cannot wield normal swords or weapons, but they have an affinity with magical swords. Now, obviously due to poor attack tables, and no armor - most magic swords should be given to fighters first - but if more than a couple are found, feel free to let your wizard have one.