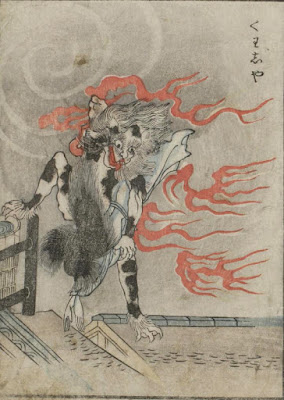 Kasha are shape-changing humanoid cats. They can appear as normal cats, and easily blend in towns and cities. In monster form they appear as large (7’ tall) humanoid cats, with long sharp claws. They eat fresh human corpses and tend to hang around cemeteries and burial mounds.


Kasha make their lairs in abandoned houses, ruins, or even old burial mounds. 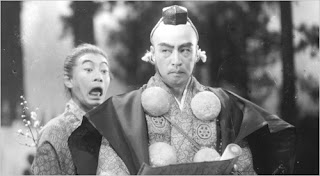 So yesterday while waiting on our new air conditioner / furnace to be installed, I stumbled upon the Akira Kurosawa movie "The Men Who Tread on the Tiger's Tail" on hulu plus. It is only an hour long, and based on a kabuki (and noh) play, it is brilliant. Sure there is no action and no deaths, but I loved it, and it has the best representation of Banishing Spirits (turn undead) for Ruins & Ronin...

The plot has a group of nobles playing the part of itinerant priests trying to get past a roadblock, and the one monk in the group takes the part of the head priest and delivers this line of dialogue to the Samurai guarding the road when asked to explain why they are dressed oddly and carry swords...


“We banish them with the Nine-Syllable Mantra”

“The Nine-Syllable Mantra consists of: Rin, Pyo, To, Sha, Kai, Jin, Retsu, Zai, Zen… When one chants this mantra, one stands reverently, and clenches one’s teeth 36 times, then with one’s right thumb one draws four vertical lines and five horizontal ones and then shouts “OBEY FORTHWITH!” All manner of devils, apparitions, and heathens will immediately be delivered from evil.”

More information about this movie can be found here and here, it is definitely worth watching.

Empire of the Eternal Sun Map

I have completed the map for my Ruins & Ronin setting, well except for rivers and settlements. 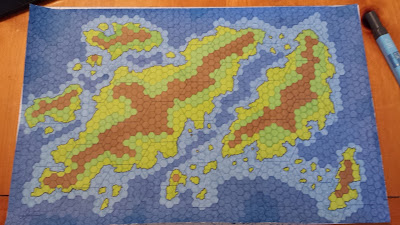 Our AC went out at our home so we are staying with my parents until  Monday, which has disrupted our normal routines. But I did bring my new map pad with me and found a set of blue FaberCastell pitt pens and decided to create a map for my Ruins & Ronin setting that I hope to use in future play tests on Google Plus.

This is the island chains known as the Empire of the Eternal Sun, which lies to the north-east of the mystic land of Mu. 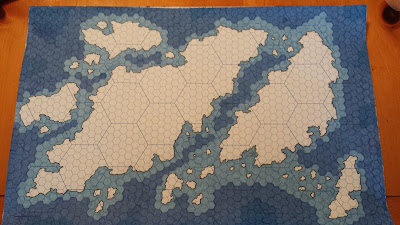 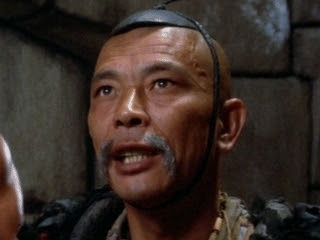 Requirements:   INT 9
Prime Requisite: INT
Hit Dice: 1d4
Maximum Level:   None
Shugenja are sorcerers and wizards, living their life away from society. They live as hermits in the wild, studying their arcane arts, and purifying their body and mind in the ways of magic.

Shugenja are unable to wear any armor, or use most weapons. They are allowed to use daggers (tanto and uchine), and all staves (bo and jo).
Special Abilities
Spell Casting: Shugenja are able to cast a number of spells each day as shown in the advancement table.  These spells are written in their many scrolls and books, and must be memorized each day in order to cast. The spells disappear from memory when cast, so each morning the Shugenja must memorize the days spells all over again.

Spells Known: To determine the amount of spells that can be learned by a Shugenja, roll on the following table.  Check only the spells of the level that the Shugenja is eligible to learn (for example a 2nd level Shungeja would roll for new 2nd level spells).


Table Explanations:
Chance to Know: This is the percentage chance to know a spell, when creating your Shugenja check each 1st level spell individually (in any order desired). If the result is equal to or less than the “Chance to Know” then the character is able to learn and cast that spell (this does not mean that the spell is immediately available for the Shugenja’s spell-book however). The spell caster must still find the spell and learn it (or copy it from another spell-book).

As the Shugenja gains in level and is able to cast higher level spells, he must again roll to find which spells he is able to learn. The order to check is left to the player, allowing him to check for the spells most desired first.

Minimum #: This is the lowest number that a Shugenja can learn for the given level, if after one attempt to know spells, this number is not met, another pass is allowed for those spells not yet known. No spell can be checked again before all spells have been checked.

Maximum #: This is the uppermost limit of spells that a Shugenja can know for each level. As soon as this level is reached, no other spells can be learned for the given level.


Attract Students: Upon reaching 9th level, a Shugenja will attract a group of 1d6 students (1st level Shugenja) that will wish to learn under their new master. They will stay in service to the Shugenja until they reach ½ the level of their teacher. Once a student reaches their mid-level, they will be replaced by a new student (1st level).


Prime Requisite: CON
Hit Dice: 1d10
Maximum Level:   6th
Half Ogres are the offspring of human women that have been ravaged by repulsive Oni (Ogres). Large, brutish hulks that are shunned by most, they lead a lonely life. Many seek a life of adventure, seeking comrades who welcome their brute strength and ability to cause harm to their foes.

Half-Ogres stand close to seven feet tall, and have immense strength. To determine your character’s size, roll 2d6 and add it to 78. The total is your height in inches (between 6’6” to 7’5”).

Half-Ogres are able to use all weapons (except for bows) and can wear any armor. Although armor cost is doubled due to their immense size.

Special Abilities
Brute Strength:  Half-Ogres have supernatural strength, as such they add 2 points of damage for each strength point above 14 to any melee attack (or unarmed combat) when they roll for damage (in addition to the STR table). So, for example, a Half-Ogre with a STR score of 16 would add 4 points of damage to any melee attack (in addition to the STR score). In addition, they are able to break down doors on any 1d6 roll of 2 or better (failing only with a result of 1), regardless of their STR score.

Intimidation: A Half-Ogre is fearsome to behold to most folks, any 0 level human and 1 HD monster (not animals or spirits) must make a save vs. Petrify/Paralyze or they will quake in fear or flee (as determined by the GM). If a Half-Ogre wishes to amplify this, they can bare their teeth and stare down their targets to provide a -2 to their save. (This amplification can only be done once per day per level of the Half-Ogre).


Infravision: Half-Ogres are able to see up to 60’ in the dark. 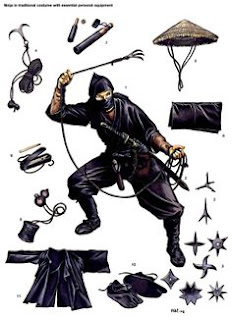 Requirements:   DEX 9
Prime Requisite: DEX
Hit Dice: 1d6
Maximum Level:   None
Ninja are spies and assassins, a tool used by the noble classes to exploit others. They are masters of stealth and gimmicks.  The Ninja have a number of special skills that set them apart from the other classes, such as climbing sheer surfaces, striking from behind, and finding or setting traps.


Ninja are not restricted to light armor, but may use any weapon. (Though Ninja in disguise can don heavier armor, but none of their special abilities can be used while so disguised).


Special Abilities
Ninja Skills:  Ninja have a number of special abilities available to them as defined in the following table. Most are rolled on 1d100, with success being the number needed or less on the roll. Each ability is defined below.


Backstab: If able to attack from behind, and unnoticed, a Ninja causes additional damage. A roll to-hit is still required, and damage is rolled normally (applying any bonuses for STR or weapon used) before applying the multiplier.


Climb Walls: The Ninja is trained to climb walls and other vertical surfaces with very limited handholds. Only one check is made for  any climb. Success indicates the climb was successful, failure indicates that the character falls at the midpoint of the climb.


Disguise: The Ninja is trained in the art of disguise. A Ninja disguise themselves to look like any class of person of  generally the same height, weight, and age as himself. This can be used to appear as a merchant, peasant, or character class. A Ninja may also disguise himself as a member of the opposite sex, though the chance of success is reduced by half. A Ninja may also try to disguise himself as a specific person, though if  he fails to impersonate a specific person he cannot try again.  The chance to disguise as a specific person is reduced by ½ as well, unless the Ninja has the chance to observe the target for a month or more.


Escape: Ninja are trained to escape from bonds (ropes, chains, etc.). The Ninja is allowed one attempt, and if guards are present, they will be immediately alerted to his attempt to escape and will be able to stop him easily. The escape takes 1d6 rounds.


Fall: This is the distance a Ninja can fall without taking damage. A Ninja avoids damage by tumbling and rolling. If a Ninja falls farther than the distance listed, he suffers normal damage.


Find/remove traps: Experienced as he is in the use of small gadgets and devices, the ninja can also find and disarm hidden traps. The GM secretly rolls for the result. Once a trap is found, the Ninja has an equal chance to remove or disarm it. Only one attempt to use this ability is allowed per Ninja per trap.


Hide in shadows: This ability allows the character to make himself unnoticeable to normal vision in areas of shadow or deep gloom. The ability cannot be used while someone is the Ninja. The GM rolls the dice to determine whether the Ninja hides successfully, the player character will  always think that he's hidden.


Move silently: This ability can be used anytime the Ninja moves on foot. Ninja who successfully move silently can try to ambush travelers, surprise or slip past guards, etc. The GM rolls the dice to see whether the attempt succeeds. The homes of important or powerful people are often fitted with "nightingale" floors, specially designed to squeak when stepped upon. Such floors reduce the ninja's chance of moving silently by one-half.


Open Locks: A Ninja may try to open any lock only once per level. If the test fails, then no amount of trying will ever open the lock (cannot be tested again) until a new level of experience is reached.


Pole Vault: Using a long springy pole (such as a length of green bamboo)  and a running start, a Ninja can vault upward and forward much farther than a normal jump. At least 20-feet of space for a running start is needed, and  a pole at least four feet longer than the Ninja is tall is required.  If  using the vault to cover  a distance, then the Ninja can vault a distance equal to twice the length of the pole.


Tightrope walk: A Ninja is able to walk ropes, narrow beams, and ledges with relative ease. Only one check is made per attempt, and if a balancing item (such as a pole) is used, it  increases the chance of success by 10%.