While reading kesher's latest entry on his Sandbox Empire blog, he had a player show up with a balrog character. I think this is just awesome, I have always loved the imagery of the fight in Khazad-dum between Gandalf the the mighty creature of "Shadow and Flame". Kehser was nice enough to link to this post on the OD&D forums about the character class, which I took and ported over to Swords & Wizardry. It was hastily built, so if you see any typos, I am not surprised. Now I am thinking of how cool a 1st Age Middle Earth game would be, though it would require some shoe-horning to allow elves and balrogs to adventure together - ok maybe that idea is not so good - but I do want to see one of these in play.

Here is a link to the S&W version of this character class.

Third time is the charm...

I have re-worked my Ruins & Ronin character classes for the third (and hopefully, last) time. I dropped the Yamabushi in favor of a more powerful (and costly to level) Shugenja class capable of both divine and arcane magic. I have added the Sohei (partial spell-using) warrior-monk and the Yakuza. The Samurai also some some changes this time 'round and I think I like it in this state. That is the last time I tinker with these (unless I get some good feedback) classes, as I am not progessing like I would have hoped. Thanks to the S&W Forums, I have added a few new monsters to my supplement though I still need work there too.

So, if you have time, and feel like looking at some character classes, download my pdf's and give me some feedback (comments or email are fine - you can email me at trampled.dwarf AT gmail.com). 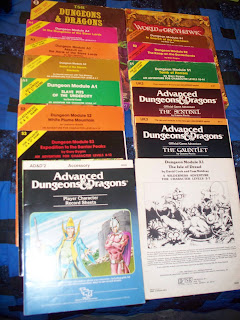 A friend of mine was selling his old gaming stuff and thought I might be interested in his D&D stuff. Uh, hell yeah I was. The character sheets are unused and the book is still complete. Very nice. I am giddy. Some of it is duplicates for me (like Tomb of Horrors, and White Plume Mountain) but most of it I never had as a kid but have always wanted (like UK2 / UK3). The Greyhawk box set is a duplicate but is in much better condition than mine.

Here is my monk class for the upcoming Ruins & Ronin supplement.

Monks are ascetics who belong to one of the many temples dotting the land. Their training is spiritual and hones the body and mind towards the path of enlightenment. They strive to achieve perfection in all they seek to accomplish. In their quest for physical perfection they become masters of both armed and unarmed combat. Their mental training grants them knowledge into the mysteries of the universe. They are not spell casters and cannot gain divine spells as Yamabushi, nor are they the greatest fighters, but they have special talents that set them apart from the other classes.

Fleet of Foot: Due to the immense physical training the Monk is faster than most characters. The monk's base move rate is 15, their move rate increases by +1 per each level of experience. (up to a maximum of 30).

Uncanny Climb: The monk has an almost mystical ability to climb sheer surfaces with no hand holds or ropes. The base chance is 14 in 20 (on a d20 roll) and increases every 2 levels (up to a maximum of 19 in 20 chance at 12th level).

Martial Arts: A monk can attack with lethal damage using martial arts, the initial damage is 1d4 from these attacks. This increases to 1d6 at 5th level, 1d8 at 10th level, and 1d10 at 15th level.
Dodge: A monk has no need of armor, his intense training has made him quick and agile on his feet making it hard to hit him in combat. A monk has a base AC (in addition to any dexterity mod) based on the Monk advancement table below. 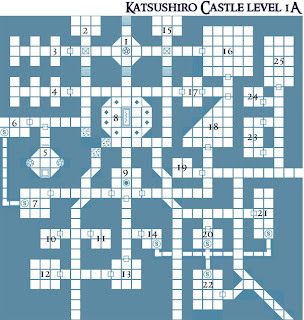 I have been hard at work trying to complete my Ruins & Ronin supplement for Swords & Wizardry, however I have taken a slight step backwards as I was not happy with the current character classes as I have them. So, in light of that I have been re-tooling my classes to make them more “different” than the core classes in S&W, I want these classes to be available alongside those of the core rules and not to be simple Japanese-like clones of them. To reach this goal, the first thing I did was scrap both the Bushi and Samurai class and then lump them together to make the new Samurai class. While it is very similar to the Fighting-man, it’s main special ability is different now:

Deadly Strike: A Samurai gains a +1 to damage dealt at 2nd level,
and every three levels after that (5th, 8th,etc.)

The Samurai still retains the Stronghold ability, but the hit die is limited to 1d6+1 and his Prime Attribute is now Dexterity instead of Strength.

Next on the chopping block was the Yamabushi, while before he was just a renamed Cleric, now he is more of his own class. He does not gain spell casting abilities until 3rd level, and he losses the ability to turn the undead. His special ability (in addition to spell casting) is now:

Purifying Ritual: A Yamabushi can perform a purification ritual, once per day he can attempt to remove a curse by rolling his level or less on a d20.

Up next was the Shugenja, he is no longer the vanilla Magic-User of my setting, now he is more of a hybrid between the Cleric & Magic-User. He is the master of the occult, and is able to cast both divine and arcane spells (chosen from his own spell lists). Also, he prepares spells as a magic-user (for both spell types). He is able to turn the undead. He pays for these special abilities by having a large increase in x.p. needed to advance in level.

I have created a Yakuza class for use too, it is based on the Thief class (submitted by “Skathros” on the S&W forums) and has retained the Bushi ability of “scrounging” that I initially used. His thieving abilities are all resolved with a d20 roll.

The only class not to be re-worked since my last attempt was the Monk. While I am not a big fan of the monk, I will still include this class for those that wish to use it.

I am very excited to announce that Pete Mullen has done some rudimentary work on my cover art, and I can’t wait to see the finished product. So the book will look good at the very least.

I have also started work on my Ruins & Ronin megadungeon, which will be called Katsushiro Castle. This megadungeon lies below the ruins of the Mad Shugenja Katsushiro’s castle, the map above is the first in what I hope to be regular installments here using the 1 page dungeon template (made by Chgowiz – and used with great effect by Sham for his Dismal Depths megadungeon). Once I have some time I will complete the template and put it here for download. 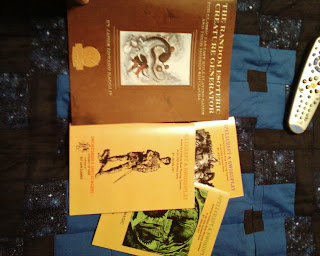 I finally got a copy of the Random Esoteric Creature Generator - For Classic Fantasy Role-Playing Games and Their Modern Simulacra, along with Spellcraft & Swordplay. I was really excited about getting both in the mail, and hope to put them both to good use. So my first experiment was an ape-like creature with a shimmering fur. So, I give you the Shimmerapes for the Spellcraft & Swordplay rules....

Large ape-like creatures covered in a slick oily fur, Shimmerapes have a single large horn protruding from their foreheads. They use these horns in combat by lowering their head and charging their foes. The slick oily fur causes light to shift slightly giving the apes a shimmering appearance (like an oil-slick puddle).