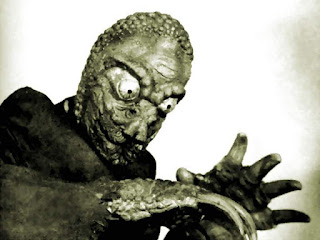 Mogura-Jin are a race of subterranean humanoids descended from a group of villagers who resorted to cannibalism during a particularly fierce winter and were cursed by the Gods. They are squat beings, between 4 and 5 feet tall with pale skin, small beady red eyes, no body hair, and nails overgrown to claws.
Like their animal namesake (the mole) they are proficient tunnelers and their preferred method of attacking their victims is to tunnel under them and emerge from the ground in a swarm attack to surprise them.


Mogura-Jin can see perfectly well even in total darkness; however their over-sensitive eyes are easily blinded by bright lights.