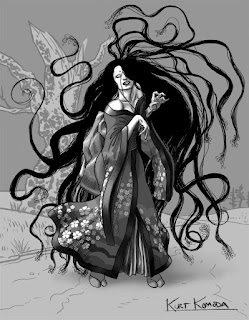 Hari Onago are fierce creatures that roam darkened city streets and alleys looking for young male prey.  From a distance they appear as young, pale women with long black hair. Once close enough to their victim (within 10’) they smile at their target (usually handsome young men), and if the target returns the smile, they strike. In a lightning fast attack their hair whips out in long strands which end in sharp hooks, and latches onto their prey with a successful to-hit roll (doing 1d6 damage). If one or both attacks hit, they are latched on and do a further 1d3 damage each round. To break free requires a strength check on 4d6 (roll equal or less than the character’s strength to break free). The victim is then dragged within striking range of the creature’s claw attack.

Once a victim is killed, the monster will devour him there in the dark streets, thus they usually prey on solitary men perhaps too drunk to resist a beautiful girls advances.


The Hari Onago makes its lair in caves, tombs, or abandoned houses near to cities and large castle-towns.

Note: This art is not from the book. Though it is amazing work.