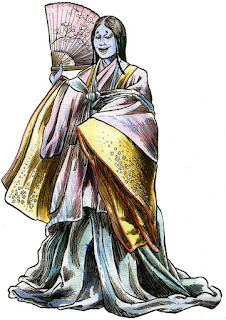 This female ghoul-creature can be found lurking in the ruins of old castles, she resembles an old courtly lady with blue skin, blackened teeth, and no eyebrows. As with ghouls and ghasts, a hit from the Ao-nyobo causes paralysis if the victim fails a saving throw. The Ao-nyobo is capable of flight and prefers to ambush victims from above - often hiding in the rafters of half-ruined buildings to swoop down upon the unsuspecting. In the outdoors, an Ao-nyobo will often chase down any escaped prey in a relentless, airborne hunt. Ao-nyobo are turned as ghasts.