Vendja Gateway to the World. 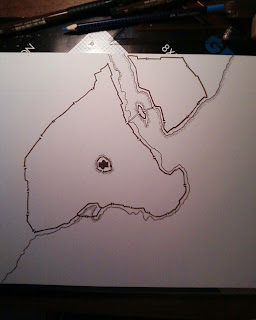 I have ran one session of my Swords & Wizardry game for my local group and I started them in the sprawling metropolis of Vendja. This city is my gateway to the world, it is the major trading crossroads between the eastern and western worlds. It is overpopulated with various cultures from around my world (which has yet to be developed). Basically it was my excuse to allow any culture that my players may have wanted to play. My problem was it also made my sandbox idea a little more difficult. Now the players have access to this major urban center and all it contains. So I have been thinking about how I can limit them before my next session (this Saturday!). I then found this excellent thread on the Dragonsfoot Forums, this seems like an excellent idea. Vendja is a worldly city with major temples from most of the religions represented there. However I am now thinking there is a major cult running the city (which still allows these temples - but not powerful clerics to practice in the city). I have decided that the cult will most likely be spider based (I love Shelob) and will have total control of the city. More details on that to come.

Now on to my mapping. I love a good city map, and while I don't feel that a city map is necessarily needed for D&D - I still like having them available. I winged our first session, as they spent relatively little time in the city (most of it was based in a small dungeon three days north of the city). Now that I am rethinking the major city (and may even use it for an urban campaign) I want to map the city. I am not the greatest artist however - even though I love to draw, so city maps have always been a chore for me. Today I started a map however, that I think may turn out okay. It is based on a map I found for Constantinople. The picture above is a crappy camera phone photo of my work so far (I don't have a scanner - though I hope to get one after Tax day). I have completed the outlines of the city walls and the citadel/temple on the hill in the city center. I have yet to sketch the streets and will probably not put any other buildings on the map. I think streets will suffice, and then I can label the city districts. I am my own worst critic, so I am sure I will hate this map once it is finished...