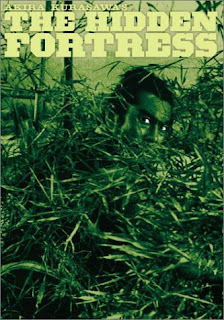 This week's IFC offering for Samurai Saturday is Akira Kurosawa's "Hidden Fortress". This was George Lucas' primary inspiration for "A New Hope", so it will seem familiar to you if you haven't seen it. Below is the synopsis from IFC.

Akira Kurosawa's The Hidden Fortress (original Japanese title: Kakushi Toride No San Akunin) stars Minoru Chiaki and Kamatari Fujiwara as a pair of misfit soldiers. Running from the enemy after a disastrous defeat, the two soldiers fall in with general Toshiro Mifune, who is in search of a huge cache of gold. Mifune is also desirous of freeing princess-in-exile Misa Uehara from the clutches of the evil victorious army. Several large and small battles ensue before Mifune can realize his goal. If the plot of Hidden Fortress sounds vaguely familiar to you, try this exercise: substitute two robots for Chiaki and Fujiwara, Mark Hamill for Mifune, and Carrie Fisher for Uehara. George Lucas himself admitted that Hidden Fortress was a principal inspiration for his Star Wars saga; stretching the point farther, both Hidden Fortress and Star Wars had their roots in John Ford's The Searchers. Originally released in a 137-minute form, The Hidden Fortress was sliced to ribbons by its American distributors, and years later received extensive restoration.