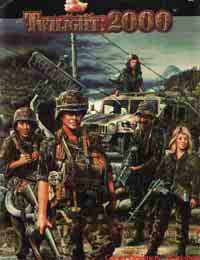 Forgive me while I ramble a bit about a favorite game of mine...

The first edition of Twilight:2000 has always been one of those games I come back to time and again. I remember buying this game with birthday money on my 16th bday, way back in '86. (Yikes). I took this game with me to Ft. Sill Oklahoma when I was in Marine Artillery school in the winter of 89 too. There is just something about this game that really sparks my imagination and my love of all things military (easy to say now that I am no longer in the military).

I dug out my old worn box the other day and have been going over it's old goodness again. I wonder what it would take to do an old retro-clone of this game? Not sure if it would be worth the trouble as the PDF's are available at DriveThru Rpg as well as the compilation that FFE released a few years ago.

Anyway, I was thinking today that this game could be the ultimate sandbox type campaign - if you want to stick with the theme of stragglers of the U.S. Army 5th division stranded in Europe. I always played a more structured military game in the past, where there were still chains of command and players were part of units - and I think most of the T2K mailing list on yahoo groups plays in the same style mostly.

Of course, my Marine past always makes me want to use the RDF sourcebook with the 1st MarDiv in Iran. (I was in Golf Battery 3rd Bn / 11 reg / 1st Mar Div from 88-92). I may have to dig up some google maps of Iran and do a little sandbox creation. I could always throw infected "zombies" loose on them too - something like Apocalypse Now meets 28 days Later. :)

I would probably stick with Poland though, as I like the story of the destruction of the 5th division and it makes it easier to add different ranks, nationalities, and specialties in the mix. That and we can drop the chain of command, so players are more free to do as they want. Just as the game intended. Sadly I never really played it that way - and I am looking at this game in a whole new (albeit old school) light.

So, I will be re-reading the rules in the next week or so and posting thoughts on the old system. I can remember there were plenty of things I thought were "wrong" with the game - just have to remember this was not a hard-simulation of ground combat.