In the coming new year my resolution is to complete Ruins & Ronin Deluxe Edition. To do that I am going to start running some games on G+ in the very near future. In preparation for that I have compiled the current completed classes into a play-test document and it is now available here (and in my download side bar). The only class not currently in playable form is the Yakuza.

The new "deluxe" edition is based on Labyrinth Lord instead of Swords & Wizardry White Box, and this version will have art unlike the first edition. It will also expand on the GM section with rules for domain level play / events.

Here is a mock up of a "dream" cover by Trey Causey (a fellow Hydra member and author of From the Sorcerer's Skull blog): 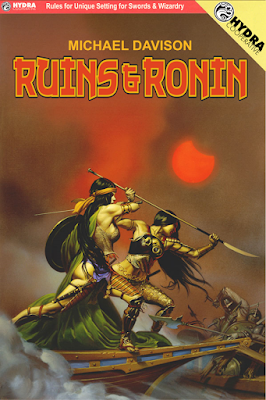 I am currently working on another Warhammer 40K / B/X D&D mashup. I am converting the B2 Keep on the Borderlands to use and hope to playtest soon. The game will be a dungeon crawl / adventure game about rooting out Chaos infected elements in the name of the Emperor (much like Dark Heresy only using B/X D&D). 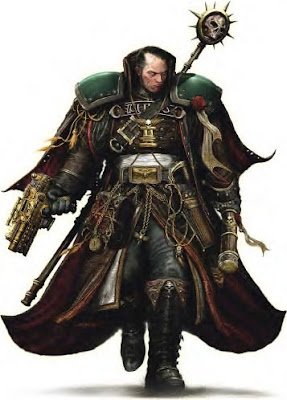 This is very much a work in progress, but I am concentrating on the Caves of Chaos first so I have something to play-test once it is ready. Basically the Keep on the Borderlands is the Hive City of Volgograd IV and the Underhives of Chaos are where the main adventure will take place.

I have already begun work on the conversion and here is my sample "start" text from B2:


Start: The passageways you have been marching through have been getting more dense with debris, and gloomier than before. The thick, twisted steel beams and exposed wiring snagging on equipment and tripping your steps as you force your way deeper into the underhives, seems to warn you about the way ahead. Relentless, you pass deeper into the bowels of the city, and suddenly the way ahead is clear and you stand in a city square that looks like a canyon. The walls rise hundreds of feet above you and before you are three walls with various balconies with looming black openings into the heart of this secret part of the city.  The air is thick with the smell of burnt rubbish and the ever present smell of machine oil.  Rusted and abandoned grav-bikes litter the ground before you, picked clean of parts long ago.  Graffiti covers much of the walls, tagged by many of the gangs and cults of the hive city of Volgograd IV.

You know that you have certainly discovered the Underhives of Chaos.

New Bundle of Holding features Misty Isle of the Eld...

Along with Yoon-Suin! Check it out the latest Bundle of Holding! 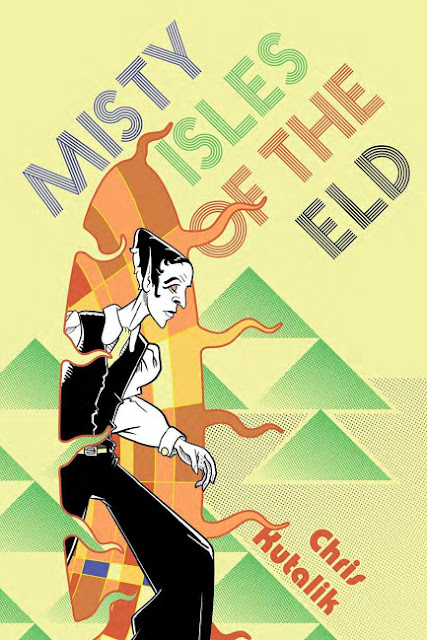 Jason Sholtis (of Dungeon Dozen) has joined forces with the Hydra Cooperative to launch his kickstarter for OPERATION UNFATHOMABLE! I had the chance to play in this setting run by the man himself this year at NTRPG, and it was an absolute blast. Jason is an amazing artist and has Jez Gordon doing the layout for this project and the sample pages look fantastic.

Take a moment and check it out! 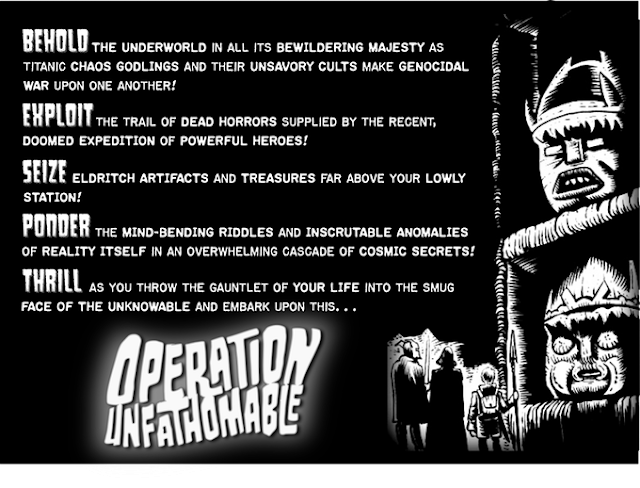 Misty Isles of the Eld is the deal of the day

Over at Drive Thru RPG, Misty Isles of the Eld by Chris at the Hill Cantons is the deal of the day. If you don't have a copy, well, you should. Honestly. 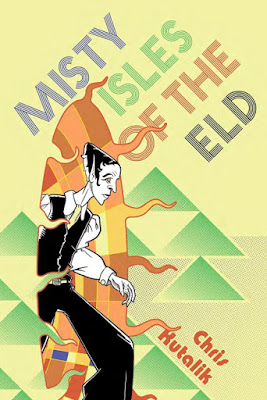 My new blog (about Rolemaster)

I have started a new blog (using a domain I have owned for a year or so but never did anything with). It is dedicated to my latest project - returning to my old stomping grounds of Rolemaster. I am using this new blog as an attempt to focus my mind on one project. So this blog will be quiet for a while (well, probably not much more than it already is to be honest).

Check it out if you are so inclined...

THRAKORZOG BLOG (the name of my favorite Tick villain - and my user name for World of Warships). 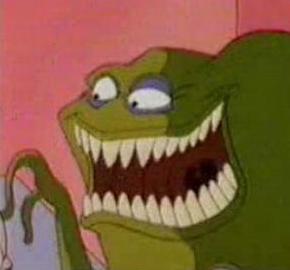 Email ThisBlogThis!Share to TwitterShare to FacebookShare to Pinterest
Labels: rolemaster

Dissatisfied with my Axe Lands map, I decided to start a new map. This time something for perhaps Ruins & Ronin Deluxe. So here is the current map with no rivers or cities in place. I hope to do some world development in the coming weeks. 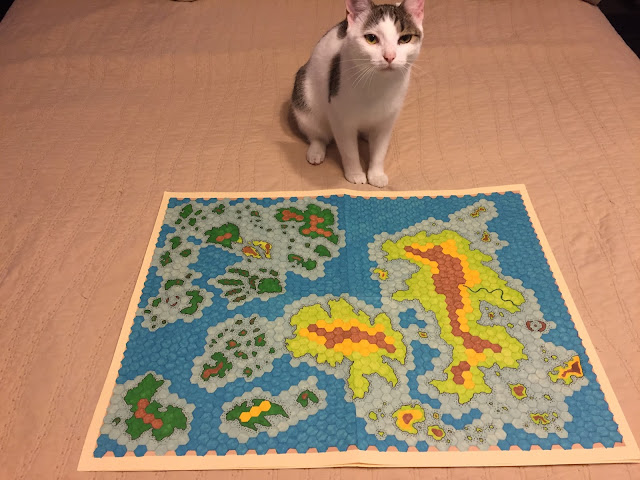 Map of the Axe Lands (in progress)

I have begun a new mapping project for my face-to-face game of B/X D&D (played with some old friends and our kids). The Broken Bay lies to the east of the Axe Lands (land of small petty kingdoms "points of light in a harsh world"), the eastern lands are known as the Grey Wastes. Once a thriving land of enlightenment now a cold desolate realm covered in ash.

Ruins of once great cities dot the lands, and bands of mutants (humanoid races) haunt the landscape scraping to survive.

The islands in the Broken Bay are the Dread Peaks, once part of the range that was above the water here before the deluge in the age or ruins that cracked the land and the great sea flooded in.

This is all just conjecture for now... 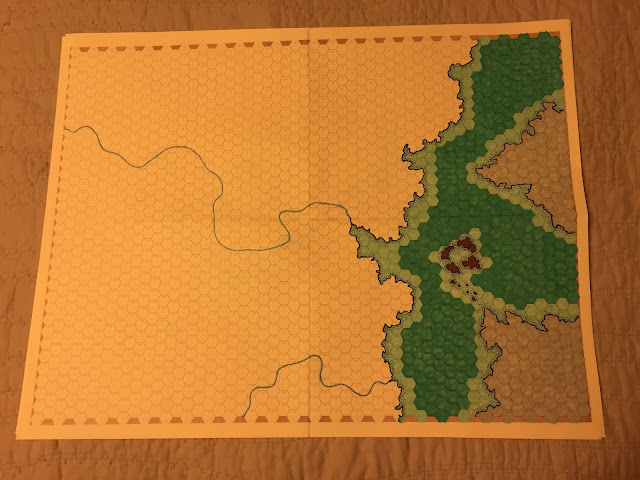 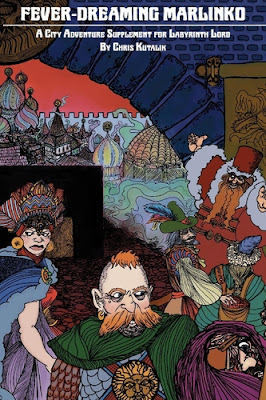 Chris has gotten a great review for Fever-Dreaming Marlinko, and well deserved praise at that. I did the layout for this book, so I may be biased but if you haven't bought it yet, check out this review.

Ruins & Ronin in an alternate universe

Trey Causey over at From the Sorcerer's Skull blog generated this brilliant what-if / alternate universe cover of Ruins & Ronin. What a thing of beauty, and it really sparked some desire to get back to R&R deluxe... maybe the spark will light a fire and I will get some work done. : ) Maybe. 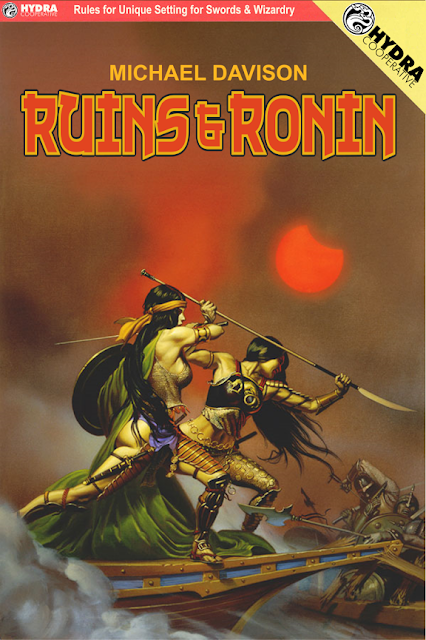 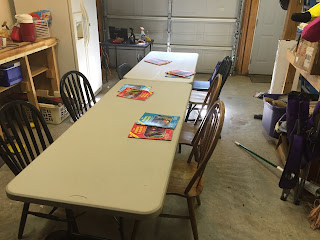 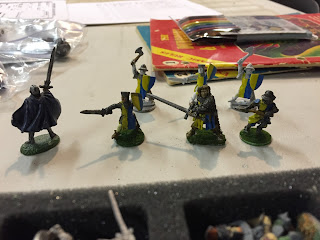