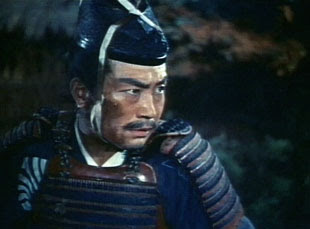 This week's IFC offering for Samurai Saturday is "Gates of Hell", another movie I have not watched. I have recorded this on my dvr in the past but never could sit through it. Not sure why - I mean it did win an Academy award for crying out loud... Anyway, here is the IFC synopsis:

Originally released as Jigokumen, Gate of Hell was one of the most popular Japanese imports of the 1954-55 American film season. Set in 12th-century feudal Japan, the film stars Kazuo Hasegawa as Moritoh, a samurai whose courage in defending his ruler is to be rewarded with anything he desires. He desires the beautiful, aristocratic Lady Kesa Machiko Kyo who happens to be already married to another samurai, Wataru (Isao Yamagata). Moritoh attempts to persuade Kesa to leave her husband but her devotion is unshakeable. The winner of two Academy Awards and a Cannes grand prize, Gate of Hell is perhaps the most dazzling example of Japanese color photography of the 1950s. The film was based on a well-known play by Kan Kikuchi.