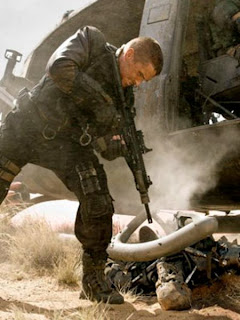 Yesterday I watched Terminator Salvation, and while I was totally disappointed in the movie, there were some really cool elements in there. I will not go into any rants about the film, like how surely Skynet would have radar and would certainly be tracking any aircraft other than their own. No, I won't talk about the chance of walking away from not 1, but 2 helicopter crashes. (I know, it's a movie, but my suspension of disbelief can only carry me so far.) I like some realism in a gritty future apocalypse sprinkled with bits of fantasy.

Now there were some moments when I loved the movie, the entire scene in the ruins of L.A. with Reese were excellent. I also loved shots of the resistance fighters huddled around radios. This perked my interest back in my "The End" setting. I started working on that idea again, however instead of just a zombie apocalypse, why not support any kind of future calamity which pits men against some invader (dead or domestic).

So I have revamped my work on a Swords & Wizardry white box supplement and titled it "The Resistance". Characters can be one of three core classes, the Resistance Fighter, the Medic, and the Techno-Rat. You can plop these classes in the middle of any modern/futuristic setting overrun with bad guys. Be they evil machines, alien invaders, or a plague of zombies. The Resistance are small cells of guerrilla soldiers, fighting as insurgents against whatever foes you can throw at them.

I have written up a modern weapons document based heavily on the Best of Dragon Vol 1 article entitled "Sturmgeshutz and Sorcery". While this article was written as a world war II add on to D&D, it should work well enough with modern/futuristic rules. The biggest change for S&W is that to hit with a modern firearm is not based on AC, but on a base 8+ to hit. There are Situational Modifiers to this base that is explained in the document. Also, all classes can use firearms (though R.Fighters get a +1 bonus to hit and +2 to damage).

So, download the 2 documents (both are available under my "Downloads" section of the blog), and send some killer robots after your friends. If you can hear this, you are THE RESISTANCE.